Regarding narration, that there is no inheritance from prophets.

Kattani in “Nazmul mutanaseera min al hadeethal mutawateera” (272) wrote:
“Narration that no one inherits from prophets, everything that they leave behind is for charity
Suyooti in “Azhar” reported it via:
1) Umar.
2) Uthmaan.
3) Ali.
4) Sad ibn Abi Vaqas
5) Abbas.
6) Abu Bakr.
7) Abdurrahman ibn Auf.
8. Zubayr ibn Awam.
9) Abu Hurayra.
10) Aisha
11) Talha
12) Huzayfa.
13) ibn Abbas.
13 sahaba in total
8 from “Ashara mubashara” reported this narration. So this hadeeth is close to “Who will lie upon me
….
Ibn Hajar in “Amaliya Muhraja ala muhtasaru ibnul Hajeeb al Asli” said: “This narration, is authetic and mutawateer”.”..

“Hadith #100: We are not to be inherited, whatever we left is for charity”.

5) Tabarani from Huzayfa and ibn Abbas”.

Muhammad ibn Yahya has narrated from Ahmad ibn Muhammad ibn Isa from Muhammad ibn Khalid from abu al-Bakhtari from abu Abdallah (a.s.) who has said the following.”The scholars are the heirs of the prophets because the prophets did not leave any Dirham or Dinar, (units of money) as their legacy. What they left was certain pieces of their statements.Those who acquired anything of these pieces of their statements they have certainly gained a large share. You must be very careful, when acquiring such knowledge, to see from what kinds of people you receive them. Among us (the Ahlul Bayt, family of the holy Prophet s.a.) after every one there comes a just person who removes (and exposes) the forgeries of the exaggerators from it (knowledge), the infiltrated materials of the fallacious ones and the interpretations of the ignorant ones.”

Regarding the authenticity of this hadith, Allamah Muhammad Baqir Majlisi states in his commentary on al-Kafi, entitled Mirâat al-Uqul:
[This] hadith has two chains of narration. The first is majhul [contains an unknown narrator], and the second is hasan or muwaththaq. [Together] they do not fall short of being sahih. (Mirâat al-˜Uqul, vol. 1 p. 111)

And here scan from Khomaynis book, where he also autheticated this narration. 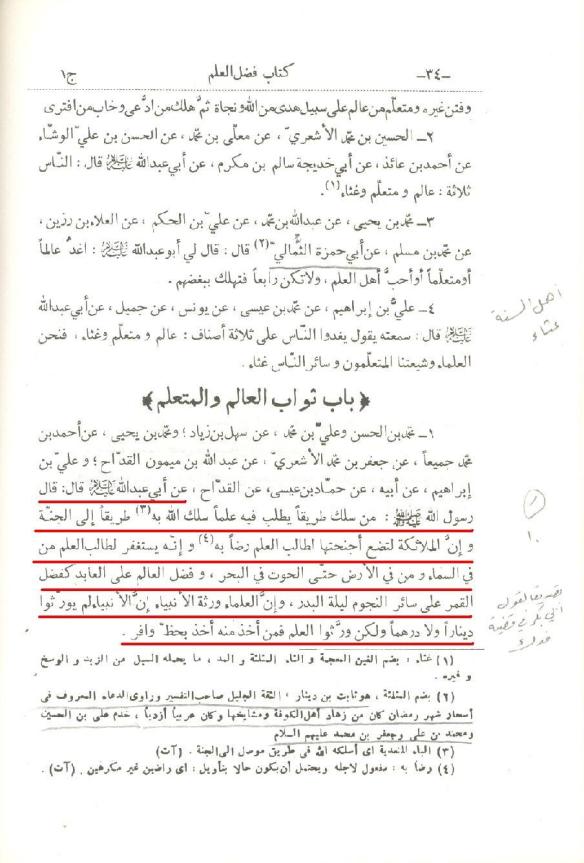 “Muhammad ibn al-Hassan and Ali ibn Muhammad has narrated from Sahl ibn Ziyad and Muhammad ibn Yahya from Ahmad ibn Muhammad, all from Jafar ibn Muhammad al-Ashâari from ‘Abdullah ibn Maymun al-Qaddah and Ali ibn Ibrahim from his father from Hammad ibn Isa from al-Qaddah from abu Abdallah (a.s.) who has said the following. “The holy Prophet has said, If one sets out on a journey to seek knowledge Allah will lead him to the way that would take him to paradise. The angels will stretch their wings for the pleasure of the seeker of knowledge and all that is in the heavens and earth even the whales in the oceans will ask forgiveness for him (from Allah). The excellence of the scholar over other people is like that of the moon over other stars during a full-moon night. The scholars are the heirs of the prophets. The prophets did not leave any Dirham or Dinar (wealth) as their legacy but they did leave knowledge as their legacy. Whoever acquires a share from such legacy has gained a very large share.

Some other shia ahadeth about this issue:

So these Ahadith of shia Imams collectively do testify to the Hadith reported by Abu Bakr [ra].

9- “…….Abdullah b. Maymoun, narrated al-Sadiq Ja’far b. Muhammad from his father, from his forefathers saying: The Messenger [saw] said: …….. Verily scholars are the heirs of the prophets, for prophets did not leave behind (as an inheritance) neither a Dinar nor a Dirham, rather they left knowledge as an inheritance…..”

It is obvious for those who hold a bit of rationalism that he [saw] meant to say, the Prophet have no heirs to inherit wealth from them, what they leave behind is knowledge, and whoever picks knowledge is like the actual heir who inherits Dinars & Dirhams.

” …. narrated Abul-Bukhturi, from al-Sadiq saying: Scholars are the heirs of Prophets, that’s because Scholars did not leave behind for inheritance neither a Dirham nor a Dinar, rather they left for inheritance Ahadith of their sayings….”

Apparently Abu Abdullah (r.a) has erred here, because some scholars do leave behind some wealth for inheritance, unless it was a slip of a tongue or an error by the copiers.

So clearly the distortion is in misunderstanding. The Ahadith are explicitly stating the Prophets leave no money or its worth for inheritance, but they do leave a knowledge, whoever picks it is actually an inheritor of the prophet.

The above ahadith do support the Hadith reported by Abu Bakr [ra] as well as his cause for keeping Fadak as a property for the State. Sure, had Abu Bakr[RA] or Omar [ra] inherited Fadak for their ownselves, charges would have a merit, but they managed it as a Sadaqah fi sabeelillah, and so did Ali [ra] when he became a Caliph.