Athar: Abu Bakr said ‘I did three things that I now regret, they are: That I failed to show respect towards the house of Fatima…….

Abu Bakr said ‘I did three things that I now regret, they are: That I failed to show respect towards the house of Fatima. I did not burn Fajaf Salmah. At Saqifa I transferred Khilafath to Abu Ubaydah or Umar. There are three things that I wish I had done: When Asheesh bin Qays was brought before me as prisoner I should have had him killed. When I sent Khalid bin Waleed to the Land of the Kuffar I should have turned him in the direction of Zay Qasa. When sending Khalid to Syria I should have sent Umar to Iraq. I regret that I did not get clarification from Rasulullah (s) on three matters: Whether the Ansar had a share in the Khilafath. Who would succeed him (s) as Khalifa.The inheritance of an aunt and nephew

However chain of this athar isn’t authentic, so these regrets of Abu Bakr aren’t proved, and most likely it’s pure fabrication.

Bukhari and Abu Saeed ibn Yunus said about him: “Munkar al-hadith”. Al-Uqayli said: “He has ahadeth that couldn’t be relied upon, and which are not known except by him” (“Mizanul itidal” 3/108/#5763).  Al-Heythami in “Majmau zawaid” (№9030) said that it was narrated by Tabarani, and in the chain Alwan ibn Dawud, and he’s weak.

And bonus another lie of AA site revealed. 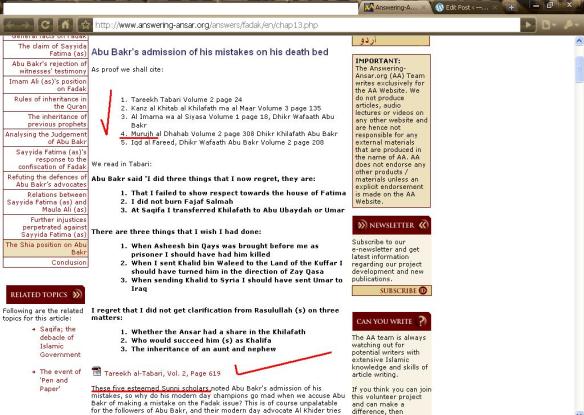 As proof we shall cite:

And few sentences after they wrote:

These five esteemed Sunni scholars noted Abu Bakr’s admission of his mistakes, so why do his modern day champions go mad when we accuse Abu Bakr of making a mistake on the Fadak issue? This is of course unpalatable for the followers of Abu Bakr, and their modern day advocate Al Khider tries his best to muddy the waters and present both parties as correct…

And by Allah they lied! Masoode author of “Muruj az-zahab” was known shia scholar, and not sunni one.