“Ma’a Mawsou’at Rijal al-Shia” is a book written by al-‘Allamah al-Sayyed ‘Abdullah Sharaf al-Deen al-Musawi which discusses the encyclopaedias of Shia Rijal, here the author talks about the books of the famous Shia scholar Aqa Burzugh el-Tehrani, mainly “al-Thari’ah fi Tasaneef al-Shia” and “Tabaqat A’alam al-Shia” both books were written by al-Tehrani to gather all the works of the Shia scholars throughout the ages and the Tabaqat of the famous Shias in history. 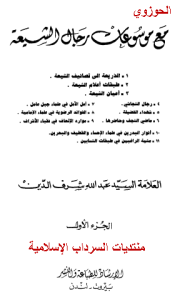 “Let us now talk about the two great and valuable encyclopaedias “al-Thari’ah” & “Tabaqat A’alam al-Shia” … And even though these two great encyclopaedias contain rich information and vast knowledge still we found in them many mistakes due to Sahu(Forgetfulness) and Ishtibah(Confusion), especially al-Thari’ah and what is extremely strange is that this book contains many of the works of Ahlul-Sunnah from their most famous classical and late scholars such as al-Baghawi, al-Wahidi, Fakhreddine al-Razi, Thi al-Noon al-Masri, al-Rafi’ee, Muhyi al-Deen ibn ‘Arabi, al-Qadi ‘Abdul-Jabbar al-Mu’atazili, Ibn Nabatah, Abu al-Fidaa, Ibn Muqlah…” 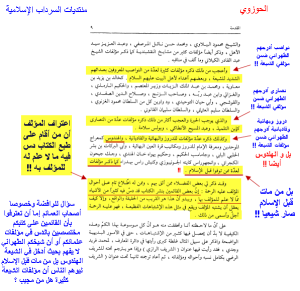 “… And I find it very strange that he would mention many works of famous well known Nawasib who hate the Shia or even Ahlul-Bayt such as Khalid bin Yazid bin Mu’awiyah, Muhammad bin ‘Abdul-Malik al-Zayyat the Wazir of al-Mu’utassim, al-Hakeem al-Tirmithy, al-Ghazzali and Ibn ‘Abd-Rabbih, Sahib al-Zinj, Saladin al-Safadi, al-Qawshaji, Abi Hayyan al-Tawheedi…

From what causes confusion is that he also mentioned a few of the works of Christians like Ibn Tilmeeth, ‘Abdul-Maseeh al-Antaqi, Boulos Salamah.

Some of the virtuous men whom I consider trustworthy as they have vast knowledge about the condition of the author have told me: “Some of those responsible for publishing the book have inserted many things into it in which the main author had no knowledge of.” apparently this is close to the truth and nearer to reality, otherwise how is it possible that the author would be so confused as to fall into such great errors, he is much greater and higher than this.”

So now dear Shia, we have three choices:

1- Either the author Aqa Burzuq el-Tehrani is such a big ignorant that he’d confuse Christian and Nasibi and Hindi books with twelver shia books.

2- Or that al-Tehrani purposely did this to boast about his Madhab and give the ignorants the impression that the Shia have so many books.

3- Or the Shia scholars who are responsible for publishing these books are intentionally corrupting them, adding whatever they please.