I would like to express thanks to shia site alfeker, which is shia version of waqfeya site.

Before I read this book, I thought that I seen worst examples of how shia shaykhs could lie upon their readers. But this Bahrani little fellow break a record.

Here cover of the book:

Narrated Ahmad ibn Hanbal in his Musnad with his chain till Jabir, from messenger  – sallalahu alaihi wa ali: Ali best creation, and no one except hypocrite wouldn’t hate him, and Jabir said: And we didn’t recognize hypocrites except but by their hate towards him.

I say: This is pure lie!I didn’t find such hadith in any edition of Musnad! And I challenge any shia to present a single hadith from Musnad with this text!

And this is also pure lie. Because Muwafaq Khawarezmi not known as muhadith, contrary to this he known like person who gathered and collected all kind of lies, and distortions in his book.

And al-Bahrani said in hadith 5: 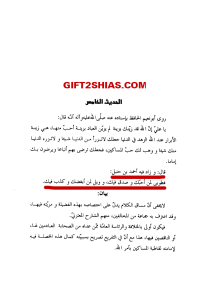 And Ahmad ibn Hanbal added to that:

I would be very please to see this in any known book of Imam Ahmad.

Hadith 7 from that book says: 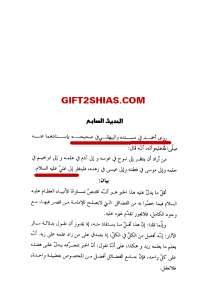 Narrated Ahmad in his Musnad and Beyhaki in his saheeh with their chain from him – sallahu alaihi wa ali:  He who wants to see Noah (AS) in his determination, Adam (AS) in his knowledge, Abraham (AS) in his clemency, Moses (AS) in his intelligence and Jesus (AS) in his religious devotion should look at Ali Ibn Abi Talib (AS).

The very same thing could be found in famous shia encyclopaedia: 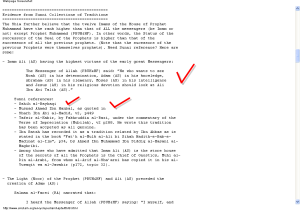 And this is also lie! There is no such book like sahih of Beyhaki, and such hadith doesn’t exist in Musnad.

Under hadith 14, this person claims that hadith al-Kisa was narrated by Bukhari, and say that this hadith is mutawatir.

We don’t know tawatur of this report, and we never came across to known sunni muhadith which would claim this.

In sources which are available for us, this hadith present from the reports of Umm Salamah, Aisha and Abu Sayeed al-Khudri.

And under hadith 19, Bahrani claimed that Imam Ahmad narrated from prophet (sallalahu alaihi wa ala alihi wa sallam): “I and Ali were from one light in front of Allah, 400 000 years before He created Adam……”

And this also lie! Because such hadith doesn’t exist in book of Imam Ahmad.

I am sure than if I would read this book till the end, we would discover many other lies from this shia scholar.

1 thought on “Muhammad al-Bahrani: One page = One lie”