“Should you observe the words of our respected companions and the greatest scholars of the clear religion, you will find that many of their words conflict with the necessities and Madhab, and oppose the narrations that came from the pure Imams, and what the pious scholars had stated.” 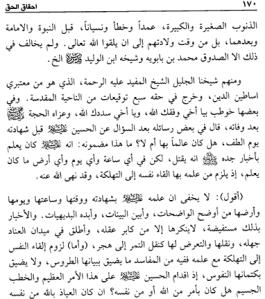 When he comes to al-Mufid on page 170 he would say:

And from those (scholars) is al-Mufid may Allah have mercy on him, who is a renowned great pillar of the religion, and he received seven signatures from the sacred one(means the Mahdi). In some of them he was addressed(by the Mahdi) as “My brother may Allah grant you success”, “My brother may Allah bless you” and the Hujjah(Mahdi) even mourned him after his death. He said in some of his letters as he was asked about al-Husein (as) before his martyrdom on the day of al-taff: “Did al-Husein know he was going to be martyred?” and in brief al-Mufid replied: “He (as) knew from the narrations of his grandfather SAWS that he was going to die but he did not know in what hour and what day and what land, as if he knew this then it would be like he threw himself to his own destruction and Allah forbade this.”

I (al-Ihqaqi) say: There is no doubt that him (as) knowing in what day and land and hour he shall be martyred is from the clearest and most obvious things. The narrations about it are many, only an arrogant, ignorant and stubborn mind would reject them…”

I would just like to say that if al-Ihqaqi knew that these scholars were so great and especially when he’s talking about al-Mufid, he stated that al-Mahdi used to send him letters calling him “My brother” and making Du’ah for him and he even mourned his death when he passed, then after all of this al-Ihqaqi has the audacity to disagree with his opinions and even call him an ignorant and other names… just because he said al-Husein (ra) doesn’t know the future… I leave the Shia to ponder upon this and look at the reliability of their scholars who disagree with each other on the necessities of the Madhab.
Salam ‘Aleykum,