Just another example of shia lies. 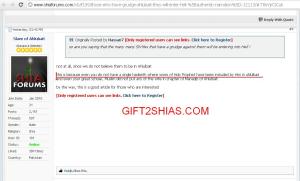 So basically this liar said:

However this is lie.

Anas bin Malik reported: “A banquet of bread and meat was held on the occasion of the marriage of the Prophet to Zainab bint Jahsh. I was sent to invite the people (to the banquet), ………. The Prophet left and went towards the dwelling place of Aisha and said, “Peace and Allah’s Mercy be on you, O the people of the house!” She replied, “Peace and the mercy of Allah be on you too. How did you find your wife? May Allah bless you. Then he went to the dwelling places of all his other wives and said to them the same as he said to Aisha and they said to him the same as Aisha had said to him.” (Saheeh Al-Bukhari, Tafseer Al-Quran, Surat Al-Ahzab), (Al-Nisa’ei, Work of the day and night, 271)