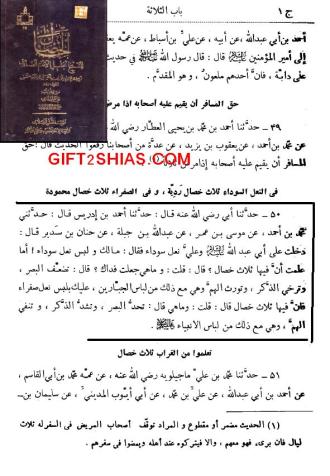 “My father -may Allah be pleased with him- told us: Ahmad ibn Idris told us: Muhammad ibn Ahmad told me: on the authority of Musa ibn Omar, on the authority of Abdullah ibn Jibillah, on the authority of Hanan ibn Sudayr, he said: I entered on Abu Abdullah -peace be upon him- wearing a black sandal, so he said: ‘What’s with you wearing a black sandal? Did you not know that it has three traits?’ I said: ‘what are they, may I be sacrificed for you?’ He said: ‘it causes weak eyesight, loss of the erection, and anxiety, and in addition to (all) that it is the wear of the arrogant;…’!!!! [and ‘Abu Abdullah’ went on:] ‘,..so wear yellow sandals, for they have three traits’!!! I said: ‘What are they?’ He (Abu Abdullah) said: ‘sharpens eyesight, hardens the penis, and expels anxiety, and in addition to (all) that its the wear of prophets -peace be upon them'”. 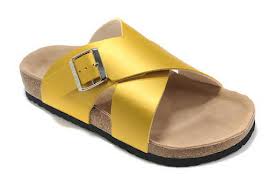