The day of ‘Arafah, a day that should be known to every single Muslim, the best day of the year in the sight of the creator of mankind, Allaah subhaanahu wa ta’aala. It is the day on which the religion was perfected (yes, on ‘Arafa and not at Ghadir Khum as the Rafidah claim) and Allaah’s Favour was completed.

The Prophet (peace and blessings of Allaah be upon him) said:

“Yawm ‘Arafaah (the day of ‘Arafaah), Yawm al-Nahr (the Day of Sacrifice) and Ayyaam al-Tashreeq (the 3 days following Yawm al-Nahr) are Eid (festival) for us, the people of Islam. These are days of eating and drinking.” This was narrated by the authors of al-Sunan.

In Al-Saheehayn (Bukhari and Muslim) it was reported from ‘Omar ibn al-Khattaab (may Allaah be pleased with him) that a Jewish man said to him, “O Ameer al-Mu’mineen, there is an aayah in your Book which you recite; if it had come to us Jews, we would have taken that day as an ‘Eid (festival).” ‘Omar said, “Which aayah?” He said: “This day I have perfected your religion for you, completed My favour upon you, and have chosen for you Islam as your religion.” [al-Maa’idah 5:3 – interpretation of the meaning]. ‘Omar said, “We know on which day and in which place that was revealed to the Prophet (peace and blessings of Allaah be upon him). It was when he was standing in ‘Arafaah on a Friday.”

It is the greatest ‘Eid (yet the Rafidah have innovated the ‘Ghadir Khum’ ‘Eid’ and call it the GREATEST ‘Eid in the sight of Allah, ”Eid Allah Al-Akbar!) of the Muslims. It is a day by which Allaah swore an oath. “By the witnessing day [Friday] and by the witnessed day [the Day of ‘Arafaah].” [al-Burooj 85:3]. Fasting on this day is an expiation for two years (Narrated by Muslim). It is the day on which Allaah took the covenant from the progeny of Adam (Narrated by Ahmad and classed as saheeh by al-Albaani). At dawn of this day, Muslim pilgrims will make their way from Mina to a nearby hillside and plain called Mount Arafa and the Plain of Arafa. It was from this site that the Messenger of Allah (صل الله عليه و على آله و سلم) gave his famous Farewell Sermon in his final year of life.

Now what you have read above is what the day of ‘Arafa is to MUSLIM, the people of Islam, the Ahl Al-Sunnah. The day of ‘Arafa is ALL about Allah, worshipping him alone, best at ‘Arafa, calling upon him alone, seeking his forgiveness. Now what do you reckon? What is the day of ‘Arafa all about according to the Rafidah?! Exaggeration with the Messenger of Allah?! Of course not, that’s what other sects do, Rafidah are known to exaggerate with anyone BUT the Messenger of Allah (). Their Ghuluww (extremism, exaggeration) is ALL about Ali (RA) and Ali’s Household, hence these Turbanised heretics have even corrupted the true message of the day of ‘Arafa and exaggarated with the Ahl Al-Bait (as usual) and claim the unbelievable, namely: 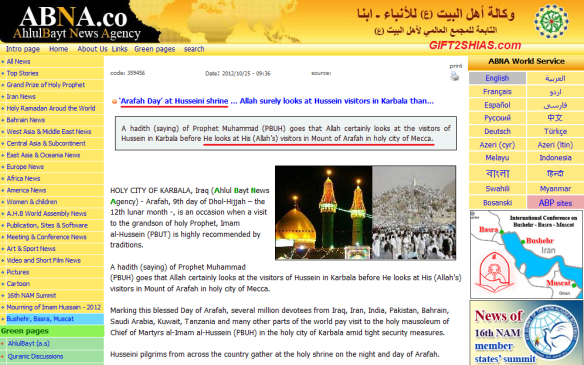 A hadith (saying) of Prophet Muhammad (PBUH) goes that Allah certainly looks at the visitors of Hussein in Karbala before He looks at His (Allah’s) visitors in Mount of Arafah in holy city of Mecca. 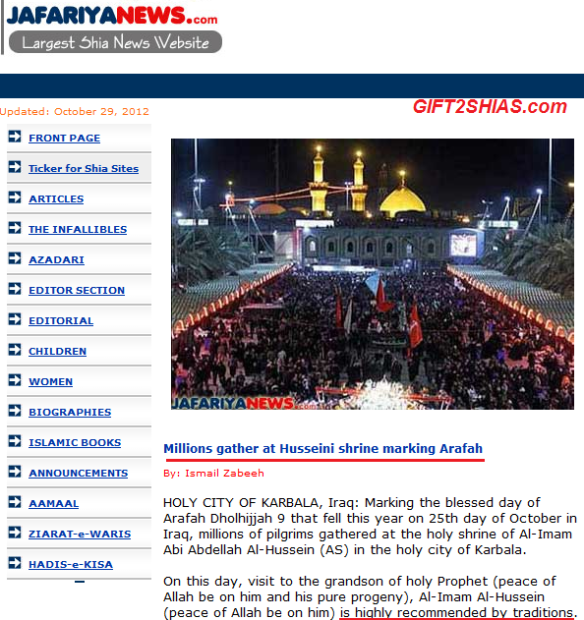 Yes, these concoctions they call the ‘school of Ahl Al-Bait’, these blatant lies they have ascribed to the Messenger of Allah () and his progeny, there is not a single Islamic belief that these tomb-worshipping heretics haven’t distorted, even on the day of Labbaik Allah humma labbaik Labbaik la sharika laka labbaik (the Talbiyah, a formula of answering Allah’s Call for Hajj of the pilgrims) where Muslims sincerely call on NO ONE but Allah alone! Even on this day, the Rafidah clergy have fooled their masses to visit the grave of Al-Hussein (a grave and shrine that was erected AFTER the religion was completed) even on this day. Alas! Not just visiting, but they put kufri beliefs in the hears of the Shia masses that being at a shrine (!) on this day is better than being at ‘Arafa and calling upon Allaah alone. Iblis himself couldn’t come up with a better method to drag people away from the house of Allah. The Rafidah have fooled millions into such deviant and hideous beliefs all under the excuse and pretext of ‘loving the Ahl Al-Bait’. There shouldn’t be any doubt that the Household and progeny of the Prophet (the Ahl and his Aal) are innocent of the Rafidah and their heresies. In fact, tomb-visitng is the true Hajj according to the Rafidah: 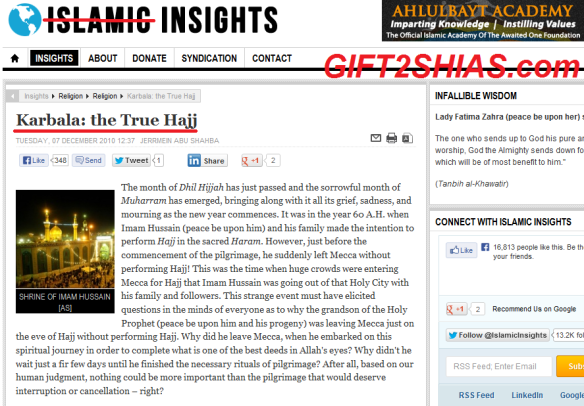 Do you get the subliminal message of this satanic sect that has the audacity to claim it is the school of thought of the Ahl Al-Bait?! They are undermining a TRUE sign of Islam which is the Hajj (you can’t do Hajj and be at ‘Arafa AND Karbala in one and the same day, not evenin the 21st century! It is a CLEAR encouragment of abondening the Hajj and dragging people to tombs!), they are fighting Islam from INSIDE (hiding behind the name of the Ahl Al-Bait). They don’t curse and fight the Prophet () and Islam directly, they do it indirectly by telling us that his major companions and wives were all hypocrite Kafirs (those who narrated the Qur’an to us!), that the real Tafsir of the Qur’an (some even say the Qur’an itself!) is somewhere with an useless and hidden ‘Imam’, that nobody understands Islam except their (most of them non-Arabic speaking) ‘Ayatullahs’! It’s all about Imams and Imams in the Rafidah religion. Hajj pilgrimage is never mentioned without the addition of shrines/tombs and Imams and this is the resulf of all these heresies:

– The true Hajj is Karlaba (visiting tombs!) and thus Allah looks at the tomb-visitors first

– Making tomb-pilgrimage is thousand times (AND MORE) better than Hajj to the Makkah! Here some ‘rituals’ from the Imamhussein-lib.com Rafidi website:

2. Ziyarat-visiting- Imam Hussain AS. It is equal to thousand Hajjs w, thousand Umrahs, thousand Jihad, and more. Traditions which stating the virtues of visiting him AS in this day are motawater-frequent-. Also the one who succeeded to visit him AS and attending under the under his holy tomb, is not less rewarded than the one who attended ‘Arafat but greater!.

Method
The method of visiting Imam Hussain AS tomb on the `Arafat Day, according to the words of master scholars and chiefs of our sect and faith, is as follows:
If you intend to visit Imam Hussain (on the `Arafat Day), you may bathe yourself using water from the River Euphrates if possible and any other possibly obtained water. You may then put on the purest (and cleanest) of your clothes and walk towards the holy shrine with tranquility and solemnity.

Then kiss the shrine and should stand up for offering a two-Rak’at prayer next to the place of the Imam’s head. In this prayer, you can recite any Quranic chapter you like.

– Visiting Al-Hussein on the day of ‘Arafa is like visiting Allah on his throne (suddenly the Rafidah become mujassims/anthropomorphists)!

THIS is how you really destroy a people and religion, not by openly attacking it (burning the Qur’an etc.), rather by CLAIMING to be its true followers and adherents(‘Ahl Al-Bait school …) and then UNDERMINING it’s REAL signs/essence by replacing them with heresies. The Rafidah have gone so far to fabricate narrations that the Imams of the Ahl Al-Bait did not FAST on the day of ‘Arafa, an established, monotheistic Sunnah:

The Shia and fasting on the day of ‘Arafah

This is the upside-down world of Rafidism! Worshipping Allah alone (by fasting for him) is haraam and a Bid’ah of the evil Sunnis, but claiming that the true Hajj is the pilgrimage to TOMBS at Karbala is the definition of Sunnah to them (doing Tawaf around the shrine, claiming that visiting Al-Hussein on the day of ‘Arafa is the best deed in the sight of Allah etc.)! Qaatalahumullah, may Allah fight the Rafidah. Lastly we leave you with a shocking video of one of their ‘scholars’ describing what Hajj means to them, surely after watching that, as a Muslims, you will thank Allah for Islam and the Sunnah, for being from the Ahl Al-Sunnah and not the Rafidah, the enemies of Islam and Tawheed: