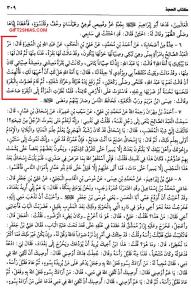 From ‘Abd Allah ibn al-Mughira who has said the following: “The pious servant of Allah once passed by a woman in Mina who was weeping and her children around her also were weeping because her cow was dead. He went close to her and asked, ‘What has caused you to weep O slave of Allah?’ She said, ‘O servant of Allah, we have orphan children. Our cow that was the means for our living has died and we are left without any means of living.’ “He asked, ‘Will you be happy if I will bring your cow back to life?’ She was just inspired to say, ‘Yes, O servant of Allah I will be very happy.’ “He stepped aside and said two Rak‘at prayers. He then raised his hands and gently moved his lips. He then stood up and called the cow to get up. He pushed the cow with his foot or a staff and she was up straight standing. When the woman looked at the cow she cried and said, ‘Jesus, son of Mary, I swear by the Lord of the Ka‘ba (he is Jesus).’ Many people gathered around and he disappeared among them and went.’”