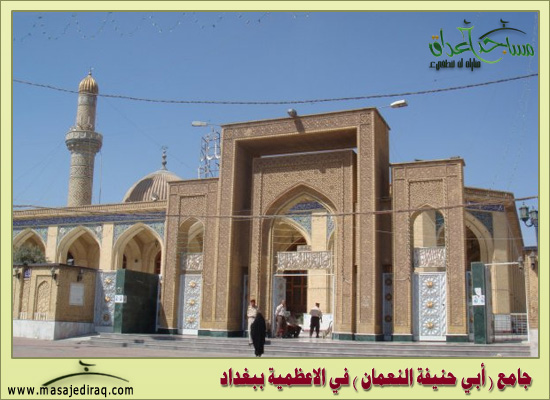 The Jame’ (one of the main Mosques) of Sunni Baghdad, Al A’dhamiyyah (named after Imam Abu Hanifah, Imam Al A’dham, hence Al-A’dhamiyyah). The Sunnis here are heavily influenced by the Rafidah (yet their lifes were still not spared from the Shia death squads), this massive Mosque includes a shrine where Imam Abu Hanifah is buried. The Imam himself would never accept to be buried in a Mosque with a shrine over his modest grave. In fact, no one built a shrine over the grave of him for 309 years after his death.

“In this year Abu Saeed whose title was Sharaf al-Malik built a shrine of Imam Abu Hanifa in Baghdad and built a dome over it, and built a Madrassa in front of it.