The Rafidah believe that `Ali b. Abi Talib had a weakness, what was that weakness? The mighty Anus of an alleged Nasibi (enemy of Ahl al-Bayt). Why would people who have turned our master `Ali (رضی الله عنه) into a demi-god would believe in such thing and degrade him like that? Well, it’s simply due to their fanatism and hatred for the Sahabah which most of the time makes them insulting and degrading the Ahl al-Bayt, albeit without realising it. Let me explain it to you further:

When Rafidah browse through Muslim history book (by Tabari, Ibn Kathir etc.) they copy and paste whatever they like and believe to represent “historical evidences”. The rule of thumb to them:

So even reports that are narrated by a bunch of liars and fabricators will suddenly constitute a prove against Sunnis and you can read and hear Shia preachers and propagandists constantly repeating them. Now besides dozens and hundreds of Sahabah whom they hate, there are of course those who are in the top ten of their list of hatred and takfir. Among them is the great Sahabi `Amru b. al-`Aas (may Allah be pleased with him). `Amr was the Sahabi who conquered Egypt under `Omar’s (may Allah be pleased with him) rule, hence he is loved in Egypt and the named `Amr is extremely popular over there. He was also the one who was dispatched by the Prophet (peace be upon him) personally to Oman and played a key role in the conversion of the leaders of that nation, Jayfar and ‘Abbād ibn Al-Juland. Ponder over this:

The Prophet sent an:

to teach ISLAM to the people. Wonder if `Amr was told to teach them about 12 Imams, infallibilty and other mumbo-jumbo Shia beliefs. Anyway, there were plenty of Bani Hashimis alive, yet the Prophet chose an Umayyad (and kafir died-hard Nasibi according to Shias) out of all? Don’t the Shia say that the religion must thought, explained and taken from infallibles? Was `Amr one? Of course not, the Prophet having chosen `Amru is just yet another of many supporitive evidence that all the aforementioned Shia beliefs are nothing but myths.

Anyway, `Amru b. al-`Aas who was an unsheathed against the polytheists (thus the Rafidah hate him to begin with), even after the demise of the Prophet (), he participated in all battles and defended Islam (that’s what Munafiqs do, huh?). Now what was his biggest crime and kufr according to the Rafidah?

Yes, as simple as this and very natural if you think about it: `Ali (may Allah be pleased with him) is really their deity, whom they invoke, ask for help, children, health, claim he was infallibles etc. so naturally anybody and anything being involved in any opposition to `Ali is a kafir to them (as if `Ali is God or a Prophet!) by default, just like anybody opposing (or objecting to) Allah is a kafir to us Muslims by default. To rational thinking human beings, let alone us Muslims, such a black-and-white thinking – in fact a Takfiri way of thinking – is of course rejected and an over simplification expected from a people who exaggerated with `Ali b. Abi Talib. The battle of Siffin was a fitnah, `Ali himself did not do Takfir on anybody who fought him based on Sahih Sunni and Shia hadith that they either don’t mention or re-reinterpret in order to uphold their takfir on the Sahabah!

Jafar al-Sadiq (as) from his father (as) who said: “Ali didn’t attribute anyone from those who fought against him to shirk and neither to hypocrisy, but he said: “They are our brothers which rebel against us.””

Note: the author of the book, al-Hurr al-Amili, stated that this was said in Taqiyyah (أقول : هذا محمول على التقية), that’s the only excuse they have, accusing the Ahl al-Bayt of Taqiyyah, yet forgetting that Ja’far al-Sadiq had the freedom to teach thousands in the Prophet’s Mosque, why would he accept such task if it includes compromising ones faith?

And if two parties among the believers fall to fighting, then make peace between them both.

Ibn Kathir in his Tafsir says:

“Therefore, Allah calls both opposing groups among Muslims, believers, although they are fighting each other. Al-Bukhari and other scholars relied on this Hadith as evidence that committing a sin does not nullify faith, no matter how major the sin is. This creed contradicts the creed of the Khawarij sect and those who accepted their idea, such as the Mu`tazilah sect. Al-Bukhari narrated that Al-Hasan said that Abu Bakrah said that the Messenger of Allah gave a speech on the Minbar while Al-Hasan bin `Ali was with him. He was repeatedly looking at Al-Hasan and then at the people; then said,

Verily, this son of mine is a Sayyid (chief or master), and may Allah make peace between two great groups of Muslims through him. What the Prophet said, occurred. Al-Hasan brought peace between the people of Ash-Sham and `Iraq, after they fought tremendous wars and frightening battles.

`Ali is a Muslim so is Amru b. al-Aas, as per the beliefs of Ahl al-Sunnah, Ali was with the truth in all his battles, that doesn’t make his opponents kafirs, not even the Kharijites, let alone some of the Sahabah (yes, some, for unlike the Shia claim, most Sahabah were not involved in the fitnah). So `Amru b. al-`Aas being involved in that Fitnah does not give green light to the cursing-obsessed Rawafid to go wild and start cursing left, right, and centre. However, you can probably guess that this is exactly what they do, in fact they have an extremely deep grudge against this Sahabi.

The anus and its kryptonite effect on the alleged infallible

To those who are not aware, the Rafidah are really obsessed with anuses. The pig faced faced father-in-law of Yasser al-Habib, Ayatullat Mojtaba Shirazi even gave an entire lecture about the anus of a Sahabi and how ‘Ali could describe it in detail. They also accuse a number of Sahabah of homosexuality (including ‘Omar, the father-in-law of ‘Ali …), they have literally mastered its sciences based on every fabricated narration they can put their hands on:

In their hunt for material to quench their thirst of cursing the Sahabah go the extra mile and dig out every narration in any book history they can find. In fact, you can’t distinguish them from orientalists who also browse history books and pick and chose whatever they deem comform with what they believe constitutes true Islamic history. Both, Orientalists and their brothers the Rafidah couldn’t care less about authenticity and scrutinizing reports.

One narration the Rafidah and Orientalists are very fond of is some weird report, apparently found in some books of history, found on many Shia websites:

Now, of course, as it is the trademark of every Shia propagandists, they will simply quote that narration and add their weird comments to it such as “Sunni sources”, suggesting to the ignorants among their audience that everything found in any Sunni book must somehow constitute evidence. This is of course nonsense, Imam al-Tabari and Ibn Kathir and others narrated many weak and completely fabricated narrations in some of their books, deliberately of course, not for dishonests Sahabah-hater to pick and chose what they like, but for future honest researchers and hadithists to scrutinize each and every report (some have done that, hence there is already a book out called “Sahih of Imam al-Tabari” in Arabic only). To Sunnis the narration above consitutes no evidence whatsover, the chain of narration is not authentic and cannot be proven as such, the text itself is weird to say the least, but those who have blind hearts and hatred for the Sahabah, it’s like a present from heaven. They quote that narration in order to attack and discredit ‘Amr, yet they don’t realise that by doing so they attack ‘Ali as well, for he is described as the most weirdest individual in the narration (translated version by Shias and copy pasted by them all over the net):

“One day ‘Ali attacked Amr ibn Aas, he threw a spear and Amr fell to the ground, Amr fell to the ground and he then exposed his buttocks. ‘Ali then turned away his face [people said] this was Amr bin Aas. ‘Ali replied he showed me his anus and this made me merciful to him. When Amr ibn Aas returned, Mu’awiya said ‘You should praise Allah and your anus”. (Al Bidayah wa al Nihayah, Volume 7 page 293)

The translation they provided is misleading, and deceiving, probably they don’t know better, as their top Ayatullats are not known to have mastered Arabic. Here the original 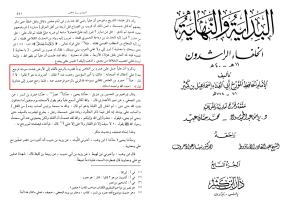 As: “Amr fell to the ground and he then exposed his buttocks”?!?!?

We seek refuge in Allah.

Nowhere in this specific narration that they brought forth, does it mention anything about ‘Amr exposing his own behind willingly as they translated. A more accurate translation would just have said that: his behind was exposed.They fail either intentionally or unintentionally to differentiate between فبدت and فأبدى.

As for the weakness of this story, Ibn Kathir before mentioning that specific story says:

Now this Ibhaam (not clarifying the names of those who stated and narrated that incident) makes it weaker than if Abu Mikhnaf (who is an extreme Shia and in the chain) was the one narrating it, or the least one can say about it is that it could not be used to establish any matter. However if the Shia do not see a problem with this issue, that would not be strange, since as their scholar Al-‘Aamili said in his Wasaail, that they accept the narration of weak narrators, liars, and those whose status is unknown. Rather they would also narrate from those liars and unknown narrators, act upon their narration, and attest to its authenticity?! They would even accept as reliable those who they know are Fasiq, Liars, and even Kaffir. So do not be surprised if they used such and similar narrations to base their Aqeedah on, or even establish anything against us.

The alleged incident of ‘Amru b. al-‘Aas exposing his buttocks as some sort of kryptonite against ‘Ali b. Abi Talib is not an authentic narration and thus does not constitute a proof evidence against him and his personality. Shias who seem not care care for authenticity should be aware and open their eyes when they look for narrations that degrade the Sahabah, for the same people who degraded the Sahabah (the liars and fabricators in those chains) had no love for the Ahl al-Bayt either, hence in the very narrations Shias use against ‘Amr and Sunnis in general we can read the weird reaction of ‘Ali:

“he showed me his anus and this made me merciful to him.”

The Majoos in Iran, the Rafidah, shot an entire movie including a scene based on a fabrication (however, they didn’t add ‘Ali’s response i.e. him becoming merciful at the sight of anus!)

If Shias were true lovers of ‘Ali they would never champion this despicable narration that no Sunni every believed in in nor propagated, it’s merely a narration in books of history (not Sahih books). Yet what do Shias do? They propagate this narration wherever they can due to their hatred for the Sahabah, even if it (the narration) states that the sight of an alleged Nasibi anus made the alleged infallible Imam merciful towards him!