In 2010 he became pretty famous around the (arab) speaking Islamic world for CELEBRATING the death of the wive of the Prophet -peace be upon him- Aaisha – radiyallahu anha-. After some rumour that the Zindeeq died (probably spread by himself and his followers to keep people busy with him and the spotlight on him) in a car accident, he re-appeared (unlike his one-eyed saviour who is hiding in the cave of Jamkaran/Qom i.e. DAJJAAL nor the REAL Muslim Mahdi) just recently and celebreted in a city with a MASSIVE presence of Sunnah Muslims, in London/UK the death of Omar Al-Farooq -radiyallahu anhu- and the victory his Omar’s  murderer, Abu Lo Lo the Persian MAJOOSI.(Zoroastrian!)

Allah knows best how in Londonistan, a Rafidi Zindeeq  dares to celebrate the death of the Mother of the Believers and Khalifa Al-Rashid Omar  without any hesitation. By the way >>>THIS HERE<<< his his Temple (“Husseiniyyah”) where all his Zandaqa takes place (the flyer has been spread by his VERY OWN organisation). BTW they call the day of Omars assassination by a PERSIAN MAJOOSIAN (ZOROASTRIAN) :

Look what lunatics they are. After inventing more than 14 Mawlids (Sufis at least just got ONE), 14 (12 Imams+Prophet & Fatima) 14 death annivesaries, “‘Id Ghadeer” they have beaten themselves and even invented the “‘ID of Zahra”. And then they’ve got the nerves to call the Tarawih of the Sunnah as “Bid’ah” (though it was DONE by the Prophet). If this is not clear-cut Dalaala and Zandaqa, then there is no Dalaala and Zandaqa in this world. Anyways, here are some pictures of the Zanaadiqa, Mushrik, Rawafidh, Persian-worshipping Majoos in London/UK:

Yassir Al Habib and the Rafidah celebrated under the following statement:

(The Shaykh (Yasir Al Habib) at the joyful celebration of the perished Taghoot: Omar Ibn Al Khattab is in the hellfire, facing a severe punishment, for having mislead this Ummah.)

In the video you can see them shouting “Omar fin-naar” (Omar is in hell) and cursing the wives and the Sahaba in their prayer:

Majoosi Kids waving with flags where it’s written: “OMAR IS IN HELL” (wal-‘Iyadhubillah) 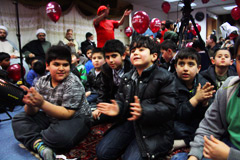 The lunatics even have brought baloons for their Majoosi kids, again they have printed on the baloons:“OMAR IS IN HELL” (wal-‘Iyadhubillah) 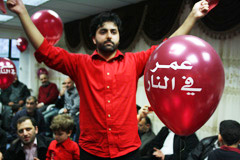 New pagan innovation: Rafidah-Majoos-Zanadiqa sending their baloons on a flight to get blessings (by cursing Omar radiyallahu anhu on baloons!) 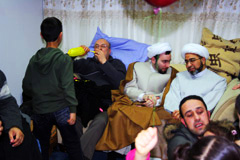 After inventing a new ‘Id in the Deen of Allah, cursing the wives and friends of the Prophet -peace be upon him- the Rafidah start to “pray”. But to WHOM to they pray? Allah? Right, as the Christians and pagans who ALSO used to pray to Allah BUT (and this was their crime) ASSOCIATED partners to Allah IN WORSHIP (like Du’a etc). >>>THIS is to WHOM they REALLY pray TO<<<